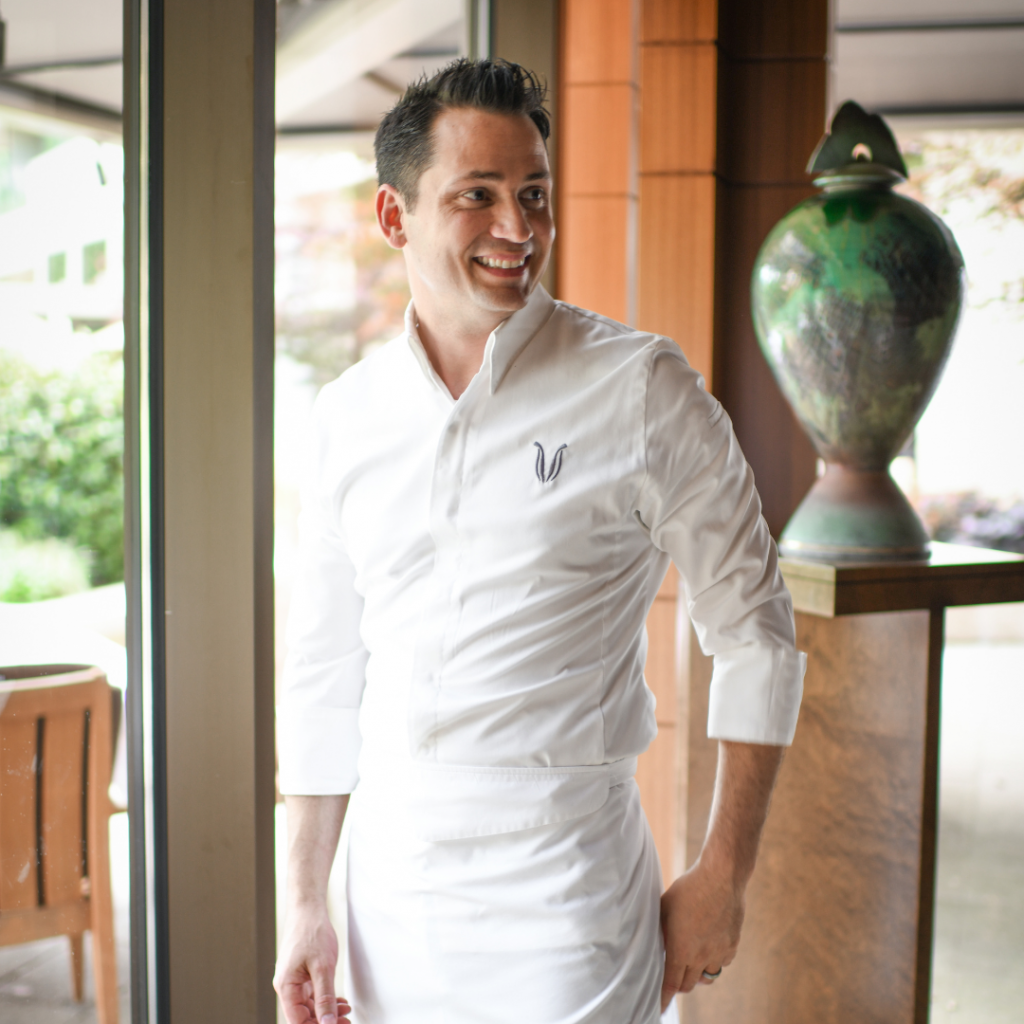 Herons at The Umstead Hotel

Steven Devereaux Greene is executive chef of The Umstead Hotel and Spa, a Cary, NC, hotel lauded for its progressive American regional cuisine. He is responsible for all food and beverage operations, including Herons restaurant, The Bar & Lounge, and catering. Greene’s passion for using ingredients and products from the rich Piedmont region to drive beautifully refined culinary experiences is evident daily in The Umstead’s award-winning dining program. Greene has been a 2016, 2017, 2019, and 2020 semifinalist for the James Beard Foundation’s “Best Chef: Southeast” award, and esteemed restaurant critic John Mariani has noted, “Herons matches everything else of quality at The Umstead, but stands as a culinary beacon in the entire region, a restaurant of great generosity and elegant proof of fine dining’s enduring pleasures.”

Greene’s tenure with The Umstead began in 2009. During his post as chef de cuisine, Greene guided Herons to its first Forbes Five Star rating. In 2012, Greene departed to hone his skills as executive chef of Cary’s New World Cuisine, a restaurant that shares ownership with The Umstead. Under Greene’s direction, it received five stars from The News & Observer and was named among “the Triangle’s crème de la crème.” Greene returned to manage The Umstead’s culinary operations in 2014 and continues to provide creative leadership as its culinary director.

In 2018, Greene introduced a new dining experience to Herons, the Art Tour, a tasting menu inspired by the hotel’s carefully curated collection of artwork, offering guests a new way of seeing and experiencing the relationship between art and nature. Moved by the pieces in the hotel, Chef Greene created a provocative multi-course tasting menu that brings The Umstead’s featured art to life. The experience received five stars from acclaimed News & Observer critic Greg Cox, in a review titled “Herons epicurean tour of the culinary arts is the meal of a lifetime” published in August 2018. The following January, Cox named Herons the 2019 Restaurant of the Year, noting “[Greene] has never failed to deliver a memorable meal when I’ve eaten there. But the last one was an experience that rose to the level of transcendent…Playing on all the senses with rare virtuosity, the meal earned a place among the handful of most memorable meals of my life…Factor in polished but unintimidating service, and an outstanding wine list, and it’s clear that Herons is flying higher than ever.”

Greene’s background includes work in some of the country’s most celebrated kitchens. After serving as chef de cuisine at the Dining Room at Woodlands Resort and Inn in Summerville, SC, Greene was inspired to open his namesake restaurant, Devereaux’s, which quickly became a mainstay in Greenville, SC. Named a “Rising Star” by Restaurant Hospitality in 2008, Greene has twice cooked at the prestigious James Beard House in New York.

Greene is the consummate Southern gentleman and hails from Ninety-Six, SC. He lives in Morrisville, NC, with his wife and son, and beyond family and food, his next great passion is guitar, which he has played for more than 30 years.

Facebook
Instagram
Laptop
Back to Talent
TWFE is always one of the highlights of the year for us. We love the whole weekend. On Thursday we love that we are able to fill a room with all our friends and celebrate with incredible wines! The gala was amazing and so fun and special. We love the addition of celebrity chefs!
Jay & Carmen RitzGenerous Supporter
I think the food is definitely as important as the wine. The opportunity to pair great food and great wine together creates a heightened culinary experience for attendees, and the involvement of our local chefs anchors this event as something special and unique to the Triangle.
Ashley ChristensenTWFE Culinary Curator
There is no drink more synonymous with the word “celebration” and “toast” than champagne. TWFE is about raising our champagne glasses high to celebrate the children and families of Frankie Lemmon and the friendships we’ve made through this event.
Todd & Lisa McGowanGenerous Supporter
For me, it’s a rare and incredibly inspiring experience to be in the same room with so much talent—there are very few local events that can illustrate the power of our food community to come together and make a huge impact
Ashley ChristensenTWFE Culinary Curator
Triangle Wine & Food Experience would not occur without the amazing winemakers, chefs, supporters and volunteers, and more importantly, the Frankie Lemmon School would not exist without them. Everyone who participates with TWFE impacts a child’s life for the better.
Joe PattersonFrankie Lemmon Board of Directors Chairman
Working with Frankie Lemmon for the past 20 years has helped me understand what a gift it is to give back and what a responsibility we have as chefs, Food is a tie that binds, and the opportunity to make a difference in someone’s life is one of the best and most rewarding aspects of this work.
Ashley ChristensenTWFE Culinary Curator
Previous
Next